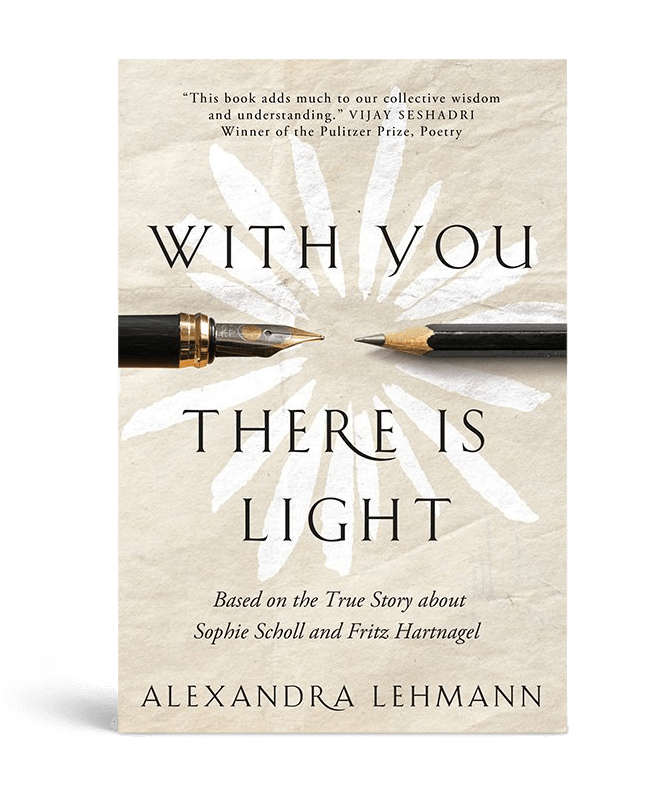 Endorsed by The White Rose Foundation

With You There Is Light

Based on the True Story about Sophie Scholl and Fritz Hartnagel
and told through letters translated for the first time.

or purchase on Amazon

Trapped in Hitler's Army, Officer Fritz Hartnagel (1917-2001) wrote to Sophie Scholl (1921-1943) about SS atrocities. With this first-hand information, Scholl, her brother, Hans, and their friends formed the White Rose student opposition in Munich.

Today they are some of the best known figures of the German Resistance during World War II.

Told through letters translated for the first time, With You There Is Light reveals how two remarkable individuals on opposite sides of war inspired one another to act against a murderous regime.

Theirs is also a true love story.

Fritz Hartnagel and Sophie Scholl met as the Nazis took over Germany. Sophie grew up in the girls' Hitler Youth as Fritz graduated as a pilot from the Potsdam Military Academy.

Not a member of the Party, but sworn to allegiance through the new army oath, Officer Hartnagel is sent to war. Sophie begins a religious journey that will influence and inform her growing desire to turn against the Third Reich.

Armed with first hand information about SS and army atrocities from Fritz, Sophie, her brother and their friends formed the White Rose student resistance at the University of Munich.

Today in Germany the Scholl name is synonymous with freedom.

He told her what he witnessed. What she did with the truth changed history.

Due to a deep familiarity with German culture (my parents survived the war in the Eastern territories) and native language fluency, I was able to ask difficult questions during my research in the language in which this history happened. “Did the German people know?” or “How much was the German Army involved in the Holocaust?” were intensely personal questions. Both my grandfathers served in this army.

I base my answers evident in this story on my family of origin’s individual history and the long, difficult hours spent speaking with family, German university professors, and archivists, as well as interviews with several eyewitnesses, including Elisabeth Scholl and Thomas Hartnagel.

I am honored to have written Fritz and Sophie’s story and appreciate your interest in it.

Alexandra Lehmann is imaginative, eloquent,and has a strong, constructive sensibility. Her long-term project, about German-Christian resistance to Hitler, embodied in the figure of the activist Sophie Scholl, is a model of how the literary and historical visions of experience can be properly blended. Alexandra's  book  adds  much  to  our  collective understanding  and  wisdom.

Vijay Seshadri
Winner of the Pulitzer Prize in Poetry, 2015

I spent last weekend reading With You There Is Light from cover to cover and was deeply  moved  by  the  lives  of  Sophie  Scholl  and  Fritz  Hartnagel  and  the  spiritual  journey they shared as they both struggled to be faithful. Alexandra Lehmann has shared an important and complex story with masterful writing that puts flesh and blood on the German Resistance. She has succeeded in making these important historical figures live for us."

Why should we read Lehmann’s novel in addition to all the historical research about Sophie Scholl and the White Rose? She  accomplished  something  that  academic  writing  cannot  do: Alexandra's writings will appeal to readers' feelings. It takes a gifted writer like Lehmann to create an emotional bridge between those brave people and us.

Get Your Copy Now

Credit Card payments are through a secure SSL encrypted payment processed through Stripe. Credit card data is never stored on our servers.