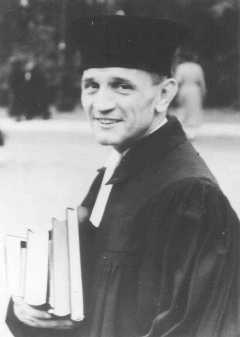 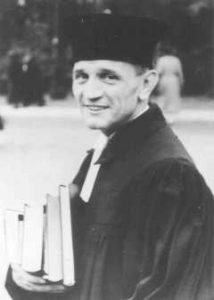 Historical Context:  Like most Protestant pastors, Friedrich Gustav Emil Martin Niemoeller was a national conservative, and openly supported the conservative opponents of the Weimar Republic. He welcomed Hitler’s accession to power in 1933, believing that it would bring a national revival. However, he opposed the Nazis’ “Aryan Paragraph“.

In 1936, he signed the petition of a group of Protestant churchmen which sharply criticized Nazi policies and declared the “Aryan Paragraph” incompatible with the Christian virtue of charity.[3] From Wikipedia

Friedrich Gustav Emil Martin Niemoeller was imprisoned by the Nazis from 1937-1945. Below is his most recognized writing:

First they came for the Communists,
and I didn’t speak out because I wasn’t a Communist.

Then they came for the Socialists,
and I didn’t speak out because I wasn’t a Socialist.

Then they came for me,
and there was no one left to speak for me.

Based on the True Story of Fritz Hartnagel and Sophie Scholl, “WITH YOU THERE IS LIGHT” is ultimately a love story about two brave individuals caught on opposite sides of war.” – Author Alexandra Lehmann