What we said and thought, so did you, only we were capable of saying it

-Sophie Scholl (1921-1943) speaking to the crowd of onlookers during her show trial where she was convicted of treason.

Seventy-four years ago on February 22, Sophie Scholl was sentenced to death by the notoriously delusional President of the Peoples' Court, Judge Roland Freisler.  Notes from the Scholl's siblings and Christoph Probst's trial did not survive the war. Research for the below scene comes from the trials of the military men convicted in the plot to kill Hitler in Berlin (known as "Valkyrie"), also presided over by Freisler. 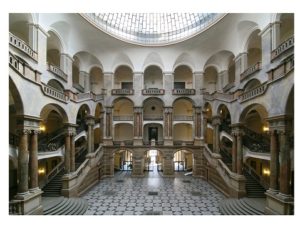 Below is an excerpt from "With You There Is Light."

“These cowards betrayed our cause when we needed them most. These useless slobs want to rob our way of life—our National Socialism. This is the greatest insult against us.”

One of the uniformed and decorated men in the small courtroom coughed uncomfortably. It would be the only sign of resistance throughout the whole proceeding.

“Their treason means death. We will someday march after the Führer into the world of freedom. Everything we are is contained in this universe. It is incomprehensible that they’ve even been able to think what they thought, never mind attempted to realize it.

They have committed treason against the German people!”

Freisler paused for a moment and caught his breath. Captivated by his speech, the courtroom was  completely spellbound. This time the words hadn’t vomited out of him, each one assaulting his listeners like arrows piercing the flesh. They came out as though they made perfect sense, as though this was the philosophy of the ages. There never were words uttered so profound and applicable. They flowed together and in their fluidity, gathered momentum and speed.

He continued in this peaceful tone.

Freisler paused, looked around at the crowd and totally satisfied, breathed deeply and sat back in his chair.

“I have studied the leaflets over the last few days and can only marvel at the pure stupidity of them. Did they really think that the German people would be stupid enough to believe their lies?” Hans was the first of them to interrupt the mad judge.

“Herr President, they did listen to us, and they would have acted very soon as we instructed them if we hadn’t been caught by your henchmen,” Hans spoke in a less than convinced voice. His voice waivered. “You will all pay the price for not standing up to men like him,” Hans continued, pointing to the crowd of onlookers. “Your conscience will never leave you alone, long after the war is over.”

For more information on "With You There Is Light," visit www.alexandralehmann.com.