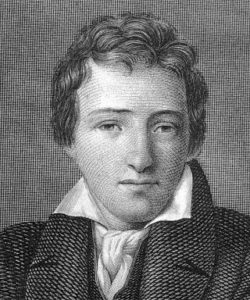 Heinrich Heine (1797-1856) German poet and writer most recognized for satire and wit. His "Lieder (art songs)" were set to music composed by R. Schumann and F. Schubert.

Historical Context:  Sophie Scholl passively resisted Hitler. She was political active as a school girl in Ulm from 1938-1940. During this time, the Reich directorate ordered that universities burn books by subversive authors including Jack London and Ernest Hemingway. Heinrich Heine's work was among the list of banned literature. In 1821, his play "Almansor" included the following line, "Das war ein Vorspiel nur, wo man Buecher verbrennt, verbrennt man auch am Ende Menschen." (That was but a prelude, where books are burned, so soon will also be people.)

EXCERPT FROM "WITH YOU THERE IS LIGHT":

The next day after school Sophie walked to the League of German Girls meeting by herself. They were no longer voluntary. She had to attend at least one a week to be able to finish school. Tonight was dedicated to German literature. Scharlo, their leader, started to take suggestions from the girls, sitting cross-legged on the church floor in a circle.

Unable to resist the temptation, Sophie got up, cleared her throat, and recited Heinrich Heine’s poem from memory:

I sit at the window and look out into the darkness.

A mother and her lantern out in the street.

She is buying flour, eggs, and butter

To bake a cake for her little daughter,

Waiting at home lying in an armchair.

Staring sleepily into the light.

The poet’s words suspended in the air and then evaporated like soap bubbles. The girls grew still by the tenderness of the rhyme.

Scharlo pointed her bony finger at Sophie and ordered her to sit down.

Sophie looked around the room at the girls who used to be her friends. Then she said, “Whoever doesn’t know Heinrich Heine’s poetry, doesn’t know German literature.”

They looked back at Sophie in bewilderment. A wide smile blessed her face and for once, her dark eyes shone with hope. Instead of sitting back down, she left the meeting without saying another word.

Based on the true story about Fritz Hartnagel and Sophie Scholl, "WITH YOU THERE IS LIGHT" is ultimately a love story about two brave individuals caught on opposite sides of war." - Author Alexandra Lehmann